This chapter reminded me of the importance of getting students to develop number sense early and often. Those first few pages of a math workbook just aren’t enough.

My school district uses a combination of Scott Foresman Math and Investigations. I love Investigations units. We spend the entire moth of August developing number sense…but this year I plan to spend even more time with it…spiraling it through my instruction daily.

During our math warm up I always do an activity called “Quick Look”  with ten frames. I flash the ten frame( like the one below) for 10-20 seconds then ask “What did you see?”

The purpose is to get them to see groups of objects.

Someone else may say “I saw three at the top and two at the bottom. Three and two is five.”

Still someone else may say “I saw three on one side and I slid one from the other side..that’s four with one left on the other side and that’s five…four and one is five.” Lots of math talk can happen in the quick five minutes it takes to do this everyday.

Click here to get your copy of my Quick Look Ten Frame cards.

All you have to do print, laminate and cut out.

I also have used white paper plates…all you need are colored sticky dots and your imagination. I’ll arrange some in the center of my paper plates (a different number for each plate). I use them the same way I’d use the ten frame cards 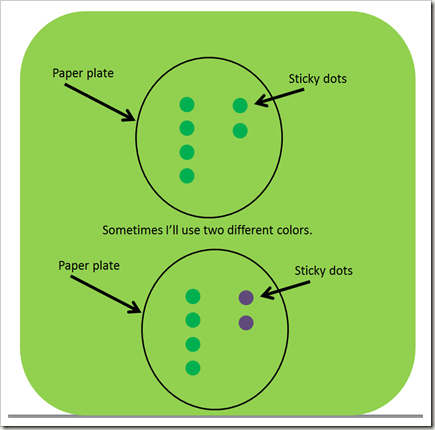 I also demonstrate the basic game of War, More, Compare, or Battle using ten frames…there’s lots of names for this game.

Early in the year I make 4-5 sets of ten frame cards(like a deck of cards). Partner one shuffles the cards and partner two deals them out. Students both turn over their top cards and compare amounts. This is where I’d add the math talk cards.

Later in the year we’ll do an addition version.

The students will turn over their top two cards, add the totals together then compare. This year I think I’ll add a Play for More/Less spinner like Debbie suggested in the book.

Then later we’ll do Teen Compare. I created cards with two ten frames on each card. One set is always ten then I vary the number on the second ten frame. They would play like regular Compare or Addition Compare. 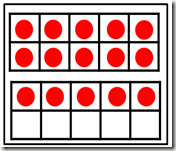 Click on the picture below to download your own set of ten frame cards and teen Cards. Just laminate and cut out. I usually make 5-6 separate sets of these cards to have on hand.  If you print the file once…that’s one set of each type (ten frame and teen frame). Print two times…two complete sets…..you get the picture.

These ten frame cards get a lot of mileage in my classroom. Sometimes I’ll make each student a mini set to take home so they are able to play some of the games at home.

Another activity I always do at the beginning of the year are number books.

If we are thinking about the number five each student gets five two-color counters and they have to come up with all the combinations of five (five red and zero yellow, three red and two yellow.) We complete the chart(pictured below together first then students have to come up with their own)

If you click on the picture, it will take you to my Shutterfly Site. Once you get to the page, look to the left and scroll down. You’ll see the header that says Building Number Sense. From there you’ll be able to download all my Number Sense Books. 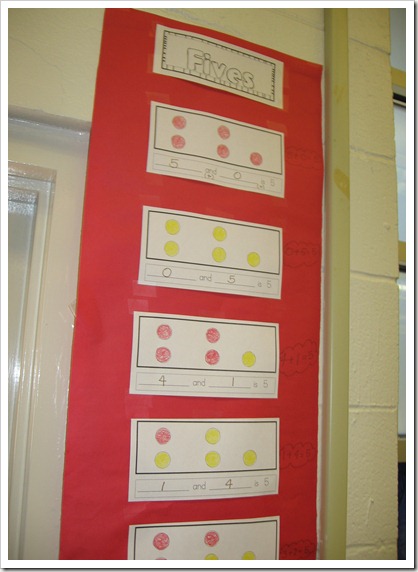 I hope there are some things you can use. Don’t forget to leave a comment about chapter four and if you have a blog link up with Fran.

On another note…..People,  I must confess I have gone Cricut Craaaaaazy! I got a Cricut Expression on eBay for less than half the price of one in the store(Big thanks to Mrs. Jump for the tip!).

And get this… I won a bid for the Cricut Imagine for a steal.

I may never come out of my craft room.

I’ve discovered this blog and I LOVE IT!